6) and proved to be no match for a soon to be appropriately resurrected political commentary:

“I believe the Prince of Darkness could start a branch of hell in the District of Columbia (if he has not already done it), and carry it on unimpeached by the Congress of the United States, even though the Constitution were bristling with articles forbidding hells in this country,” Mark Twain wrote in 1868 about the first-ever presidential impeachment of Andrew Johnson, commander-in-chief #17. The sentence could arguably have been penned today.

8) Not that there was ever a danger of any inspiring vision being lost, Trump leaned lamely back into the light, albeit only the Ultra Violet variety, in equally mockworthy style:

12) A stately, illuminated procession through the next four years will certainly be a prettier picture than having watched how the grotesque body politic of Trump, kicking up it’s petty heels, “Tripped the light fantastic / On the sidewalks of New York,” among the darkest remnants of a Presidential plague. 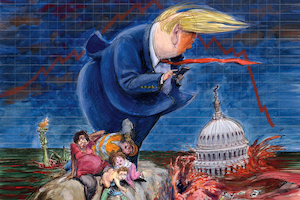